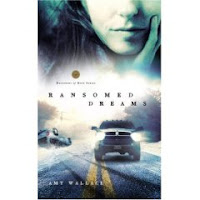 Gracie Lang is being watched by a man who will stop at nothing to hide the truth from her. Having lost the only man she ever loved and the children who were her world, the truth is all Gracie wants—an explanation for what really happened. She longs to move forward but is bound by chains of fear. Then she meets Steven Kessler, an FBI agent assigned to uncover an international plat to kidnap the British Ambassador's daughter. Steven awakes more than memories; he revives the possibility of a life Gracie desires. A life where healing and peace crowd out the nightmares. But his case and her past are dangerously connected. Suddenly, Gracie must decide if she's able—let alone willing—to pay the required ransom to redeem dreams and restore hope.

Seldom does a debut novel create excitement, but Amy Wallace has done just that. She drew me into Gracie's story with the finesse and skill of a seasoned author. She made me care. She also established that delicious sense of something's about to happen right from page one.

Being a debut book, I looked for problems. I never found any. What I did find is that Wallace turned off my inner editor, a rare feat. Ransomed Dreams has twists I never saw coming, yet each was exactly right. Avoiding all the clichés and formula writing, and in the tradition of Colleen Coble and Brandilyn Collins, Wallace has claimed her spot among the best of the best.

Page after page, I couldn't put this book down. Not once did writing grow dull. The pace was just right. Wallace must be a fisherman, because she played me like a rainbow trout, letting me run with the story, then reeling me back into the tension until I leapt with surprise.

On April 17, 2007 run—do not walk—to your nearest bookstore and pick up a copy of Ransomed Dreams. I rarely give a 5, and for a debut novel, it's nearly impossible. But Ransomed Dreams deserves that and more. It will go on Novel Reviews list as one of the top ten of the year.

Reviewed by: Ane Mulligan
www.anemulligan.com
Posted by Scrambled Dregs at 7:00 AM

I'm so excited that it's almost debut time; April 17th is right around the corner.