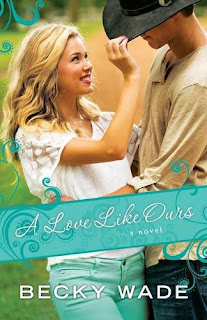 Former Marine Jake Porter has far deeper scars than the one that marks his face. He struggles with symptoms of PTSD, lives a solitary life, and avoids relationships.

When Lyndie James, Jake's childhood best friend, lands back in Holley, Texas, Jake cautiously hires her to exercise his Thoroughbreds. Lyndie is tender-hearted, fiercely determined, and afraid of nothing, just like she was as a child. Jake pairs her with Silver Leaf, a horse full of promise but lacking in results, hoping she can solve the mystery of the stallion's reluctance to run.

Though Jake and Lyndie have grown into very different adults, the bond that existed during their childhood still ties them together. Against Jake's will, Lyndie's sparkling, optimistic personality begins to tear down the walls he's built around his heart. A glimmer of the hope he'd thought he'd lost returns, but fears and regrets still plague him. Will Jake ever be able to love Lyndie like she deserves, or is his heart too shattered to mend?
Review:
A Love Like Ours is about two childhood friends, Lyndie James and Jake Porter. They grew up together and were best friends, but when Lyndie and her family moved away, they lost touch. Now, 20 years later, Jake is running his brother's Thoroughbred Ranch, and suffering from PTSD after having served as Marine overseas. Lyndie is returning to Texas with her family and hopes to get a job at the ranch training horses. Jake is surprised at his reaction at seeing her, as he has hardened his heart so much since coming home. But she makes him want to feel alive again, but he doesn't want to allow himself to feel anything. Lyndie, on the other hand, makes it her mission to draw him out and become the Jake she knew as a child.

This was such a wonderful book. I felt a kinship with it from the beginning, as my maiden name is Porter and my dad was a Marine. My heart went out to Jake. He went through a terrible event, and was punishing himself for it, even though it was no fault of his own. It just shows that when we try to shoulder our burdens ourselves, it can destroy us. I admired Lyndie's determination in re-friending him. If he had acted towards me the way he did towards her, I'm not sure I would have been able to stick around. I highly recommend this book. Looks like there were others in the series, too. I'd love to get my hands on them!

Posted by Scrambled Dregs at 2:10 PM No comments: