Susan May Warren's The Wonder of You ~ Reviewed 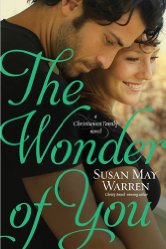 THE WONDER OF YOU
Susan May Warren
File Size: 3551 KB
Print Length: 416 pages
Publisher: Tyndale House Publishers, Inc. (June 18, 2015)
Publication Date: June 18, 2015
Sold by: Amazon Digital Services, Inc.
Language: English
ASIN: B00PCK3A7I
Mortified after her semester abroad is cut short, Amelia Christiansen returns to Deep Haven, certain she isn’t brave enough for the adventures she’s dreamed of. The last thing she expects is for the man who broke her heart to cross the Atlantic and beg forgiveness.Heir to a European hotel dynasty, Roark St. John has trekked from one exotic locale to another, haunted by tragedy and the expectations that accompany his last name. Amelia is the first woman to give him a reason to stop running. He’ll do anything for a second chance—even contend with Amelia’s old flame, who is intent on sending Roark packing.While one surprise after another leaves Amelia reeling, Roark’s continued presence only highlights the questions pursuing her. Like him, is she running from the life God has called her to? Could finding her new place mean leaving home behind?

The Wonder of You is book five in the Christiansen Family Series. In this book, Amelia, the youngest daughter, returns home from Europe with her parents after having her heart broken by who she thought was a man that didn't care for her. She met Roark St. John while taking photography classes in Europe. They hit it off right away, and though she didn't know much about him, she easily fell in love with him. Then, one night, she saw him with another woman. Now, she is back home with her parents, trying to forget him and revive her romance with her former high school sweet heart. Until Roark finds her, moves to Deep Haven, and begins pursuing her all over again. Though there are things about his life he keeps quiet at first, he does everything he can to win her heart back and prove he is worthy of her.

I was so excited to get this book. I have loved reading every book in the series, and this was no exception. My heart hurt for Amelia's character, the heartbreak she was going through, the debate on whether she could really trust Roark, and being torn between two men she loved and not knowing which one was the right one. Eventually, she was able to put her trust in the Lord to help her, which was the best part of the whole thing.

Sarah Meyers
Posted by Scrambled Dregs at 5:58 AM No comments: 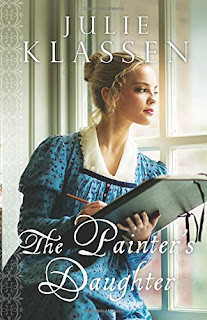 Sophie Dupont, daughter of a portrait painter, assists her father in his studio, keeping her own artwork out of sight. She often walks the cliffside path along the north Devon coast, popular with artists and poets. It's where she met the handsome Wesley Overtree, the first man to tell her she's beautiful.Captain Stephen Overtree is accustomed to taking on his brother's neglected duties. Home on leave, he's sent to find Wesley. Knowing his brother rented a cottage from a fellow painter, he travels to Devonshire and meets Miss Dupont, the painter's daughter. He's startled to recognize her from a miniature portrait he carries with him--one of Wesley's discarded works. But his happiness plummets when he realizes Wesley has left her with child and sailed away to Italy in search of a new muse.Wanting to do something worthwhile with his life, Stephen proposes to Sophie. He does not offer love, or even a future together, but he can save her from scandal. If he dies in battle, as he believes he will, she'll be a respectable widow with the protection of his family.Desperate for a way to escape her predicament, Sophie agrees to marry a stranger and travel to his family's estate. But at Overtree Hall, her problems are just beginning. Will she regret marrying Captain Overtree when a repentant Wesley returns? Or will she find herself torn between the father of her child and her growing affection for the husband she barely knows?

MY REVIEW:
Love a dark and brooding hero who’s really all heart on the inside? Captain Stephen Overtree is the man for you! He comes to the rescue time and time again in The Painter’s Daughter, another deliciously intriguing Regency by author Julie Klassen.

This tale of a marriage of convenience is sure to keep you up late into the wee hours of the morning. The heroine, Sophie Dupont, is between a rock and a hard place when she finds out she’s pregnant. Her lover leaves her behind for a painting trip to Italy.

Enter hero Stephen Overtree, a hulking captain in the army, and the brother of the man who ruined Sophie. He does the right thing by asking her to marry him, giving legitimacy to the unborn babe. But should she? She hardly knows him. She does, and ooh-la-la, what a heated relationship begins.

And therein begins The Painter’s Daughter. There’s intrigue, romance, and plenty of secrets to go around. Stock up on frozen pizzas before you crack open this one, folks. Your family will starve otherwise, because there’s no way you’ll stop until you read The End.

Reviewed by: Michelle Griep
Posted by Scrambled Dregs at 7:12 AM No comments:

Katie Ganshert's The Art of Losing Yourself ~ Reviewed 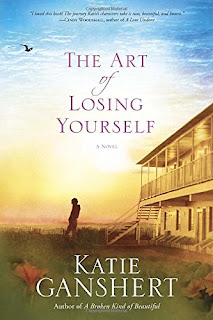 
Just like in my dream, I was drowning and nobody even noticed.
Every morning, Carmen Hart pastes on her made-for-TV smile and broadcasts the weather. She’s the Florida panhandle’s favorite meteorologist, married to everyone’s favorite high school football coach. They’re the perfect-looking couple, live in a nice house, and attend church on Sundays. From the outside, she’s a woman who has it all together.  But on the inside, Carmen Hart struggles with doubt. She wonders if she made a mistake when she married her husband. She wonders if God is as powerful as she once believed. Sometimes she wonders if He exists at all. After years of secret losses and empty arms, she’s not so sure anymore. Until Carmen’s sister—seventeen year old runaway, Gracie Fisher—steps in and changes everything. Gracie is caught squatting at a boarded-up motel that belongs to Carmen’s aunt, and their mother is off on another one of her benders, which means Carmen has no other option but to take Gracie in. Is it possible for God to use a broken teenager and an abandoned motel to bring a woman’s faith and marriage back to life? Can two half-sisters make each other whole?

I love literary novels. There are few things more satisfying than a beautifully turned phrase, a poignant metaphor, a sense-infused scene that transports a reader far away, or a character that pulls at every emotion. If you agree you need to look into The Art of Losing Yourself and find a place where you can devour and savor this novel.Told in two parallel 1st person accounts, the story centers around a dying motel, a demented aunt, and two sisters attempting to overcome huge, painful challenges.  Poignant, powerful, rich, raw and infused with faith and hope, this is one of those stories that grabbed my heart. Katie Ganshert's name on the cover is going to guarantee A place on my to read list.

Reviewed by: Kelly Klepfer
Posted by Scrambled Dregs at 3:55 PM No comments: 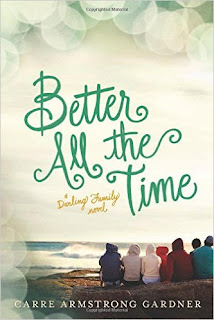 Seraphina Darling has always struggled to stand out. With her weight issues at the forefront of her mind, Sephy prefers to place herself comfortably in the background. But when Sephy’s best friend and older brother announce their engagement, she vows to make a permanent change in her appearance and her life.Meanwhile her younger sister, Amy, lands her dream job: coordinating the restoration of the community theater’s arts programs. As the deadline for the project’s completion approaches, Amy continues to run herself ragged, struggling to delegate and trust anyone but herself.As the Darling sisters move through tragedy and triumph, between shadows and the limelight, each must find a path into the freedom of who God intended her to be.

Better All The Time tells the stories of the Darling Family Sisters. Sephy is silently know as the “fat Darling sister.” She has learned to be the peacemaker and do everything to make everyone happy, all the while neglecting herself. She finally decides it's time for a change, but didn't realize how hard of a process it would be, not only to transform her body, but the way she thinks, as well. Amy Darling is very headstrong and opinionated. She takes on a job to run the new community theater program. While she strives hard to make it the best it can be, she drives the people that are closest to her away because she expects so much. We also learn of Laura Darling, who has moved across the country to get away from her family, only to find she can't get away from herself. And Ivy Darling, who we must have learned more about in a previous book, is settling in with her husband and newly adopted children.

I had a bit of a hard time following this book at first, because it jumped back and forth between so many story lines every couple of pages. There was just a lot going on. I wish I would have read the first book to get the back story, but I eventually got the jist of it. I guess the thing that I disliked about it was that God and prayer were talked about in passing, but not as if it was a main focal point of the families lives. It was almost as if they went to church because it was the thing to do, but it didn't factor into their lives all week. Maybe it did, but the author did not bring that out. I've found anymore, if I'm going to read something that is Christian fiction, I like more substance and references to the Lord, Jesus Christ and the Bible. The storyline however, was enjoyable, and it seemed to leave the reader hanging, so I am curious as to what will happen next.

Reviewed by: Sarah Meyer
Posted by Scrambled Dregs at 6:30 AM No comments: