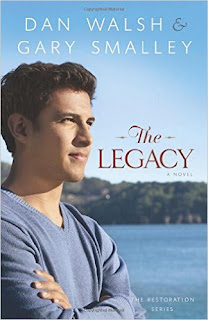 One young man is about to discover the true cost of independence
For years, Doug Anderson has been drifting slowly but steadily away from both his family and his faith. His parents have been trying to reach him before he falls too far. His friend Christina hopes what she is seeing online isn't true. But sometimes you have to hit bottom before you're ready to grow up.
Just as things begin to settle down a bit, Doug's life takes a turn that requires every bit of faith and patience for both his family and Christina--whose growing feelings for Doug, a man who writes her off as not worth his time, keep her off balance. Will Doug's crisis finally clear his vision and help him focus on what he has right in front of him?


The Legacy tells us about a young man named Doug Anderson. Having gone off to college, his parents, Jim and Marilyn Anderson, are concerned about him, as he seems to be drifting away not only from them, but from the Lord. Jim is trying very hard not to be controlling and overbearing, but is having a hard time giving his relationship with Doug over to the Lord. In the meantime, Doug is hanging out with the wrong crowd, going to parties, and sleeping with his girlfriend. Through a series of events, he comes to a point where he has to make a decision on where he stands with the Lord and his family – will he choose them, or the lusts of the flesh?


This book was pretty good, although I had a bit of a hard time following it at first as it is book four in the series and I haven't read the other books. I did enjoy it, though, as well as the sub stories. It dealt with real like problems that Christian families have to deal with now days, which is good.

Reviewed by: Sarah Meyers
Posted by Scrambled Dregs at 2:37 PM No comments: 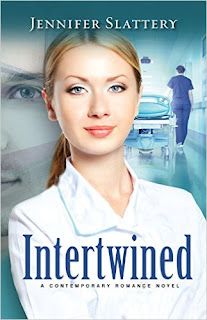 Abandoned by her husband for another woman, Tammy Kuhn, an organ procurement coordinator often finds herself in tense and bitter moments. After an altercation with a doctor, she is fighting to keep her job and her sanity when one late night she encounters her old flame Nick. She walks right into his moment of facing an unthinkable tragedy. Because they both have learned to find eternal purposes in every event and encounter, it doesn't take long to discover that their lives are intertwined but the ICU is no place for romance....or is it? Could this be where life begins again? Intertwined, part of New Hope Publisher's contemporary fiction line, is a great reminder of how God can turn our greatest tragedies and failures into beautiful acts of love and grace. Readers will fall in love with the realistic characters and enjoy the combination of depth, heart-felt emotion and humor that makes Jennifer's novels so appealing. Readers will be inspired to find God in every moment and encounter in their own lives!This book is a great resource for a book club, discussion group in women’s Bible studies, or as a ministry resource to spark conversation about practical ministry needs.

Jennifer Slattery writes about difficult subjects. Most of them are topics that aren't faced often in mainstream polite church societies. But if we are honest with ourselves we all know someone near and dear who's been impacted by divorce, addiction, mental illness and even homelessness. Two Christian women I know have gotten divorced or are in the midst of one in this past year alone. They each have families and friends who are devastated for them. One of them has three grown children who are gutted by the fracture of their family. Each of these women is struggling for different and compelling reasons. The choices and sins of others can send waves into our lives that spill out into the lives of those we interact with and our responses can become ugly sin more often than godly communication.

Slattery writes about these difficult issues and brings the reader to uncomfortable places. She does her research and homework and has tackled another controversial and difficult topic, organ donation in Intertwined. Clearly, this is not a light read nor is it your traditional light and fluffy romance.

Honestly, I struggled with her main character, Tammy. As the story developed Tammy became more palatable to me, but her bitterness was off-putting. I also had issues with her extended support system that was  made up of meddlers and manipulators. Nick had some really challenging issues and relationships as well. As I said this novel is not light and fluffy. But the value in a dose of reality can be life-changing for those who need to hear that reality.
Posted by Scrambled Dregs at 2:51 PM No comments: 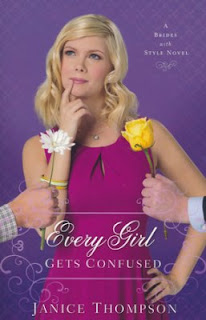 Every Girl Gets Confused
By: Janice Thompson
More in Brides with Style Series
REVELL
2015
PAPERBACK
Number of Pages: 336
ISBN: 0800724003

Katie Fisher and Brady James may be a match made in heaven, but that doesn't seem to guarantee them a happily ever after accompanied by angelic choirs. Katie's almost-fiance Casey is back in Fairfield, ready to rekindle their relationship. And there's nothing Katie's parents want more than for their small-town girl to leave Dallas and come home for good. But can she really leave Brady behind? And will she ever be able to wear that gorgeous wedding dress she won?

I appreciate that Janice Thompson put her characters through a little reality check in Every Girl Gets Confused. Now Katie is every bit of the hopeful bride. She is immersed in bridal smells and sounds and lace every day in her job as the go to girl at Cosmopolitan Bridal. But Katie takes a few bumps along the way. Take Brady for instance. The man who has stepped in to help heal her Casey-crushed heart. But even Brady, as nearly perfect as he is, has a few struggles that put Katie’s mind in a spin cycle of confusion.

And have Katie’s brothers all found true love? Then even her grandma? Katie’s still hoping for a ring on her finger but it seems as if maybe her happily ever after isn’t going to come knocking on her door any time soon.  Her parents are suddenly experiencing a second honeymoon kind of a lifestyle with adventure and trips. Casey begins to contact Katie every once in awhile to reminisce about the good old days. Brady is so caught up in his own epic challenge that sometimes Katie just feels real alone. Can she weather this storm and hold out for the real deal versus the counterfeit that keeps being dangled right in front of her?

There’s more, of course, plenty of drama for all involved. Even Doris Day gets in on the action. Needless to say, there is a satisfying ending as well as the promise of another book to resolve all the frayed and loose ends of all of Katie’s friends and families.

If you love your romance as big as Texas and sweet as wedding cake then you probably need to check into this series.

Reviewed by: Kelly Klepfer
Posted by Scrambled Dregs at 4:21 PM No comments: