Nikki Arana's The Next Target ~ Reviewed 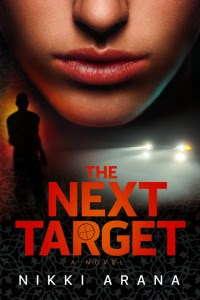 
It only took one bullet. Austia’s friend and student fell dead. And with a glimpse of a newspaper headline, the young and recently widowed Austia knows more about what happened than the police. From that fatal night, Austia’s secret outreach to the U.S. Muslim community—in the guise of English language classes—becomes a target. Local Muslim extremists set their sights on ending her ministry and even her life. And the women she ministers to will be next.

A thick web of deceit closes in around Austia, and her circle of friends becomes smaller by the day, even as she finally opens herself to the idea of falling in love again. But who can she trust? Facing a spiritual battle that proves more treacherous than it at first seemed, Austia’s convictions are tested to their limits and her heart becomes primed for breaking. She must ask herself: how much she will risk to stay true to her herself, her faith, and to the lives of the women she serves?

Review:
Nikki Arana has penned a romantic suspense novel that will challenge your thinking in a number of ways.  Bringing her personal passion of reaching Muslims for Christ to the pages, The Next Targetis a powerful story of sacrifice, compassion and forgiveness.  Nikki’s story of Austia’s secret ministry to Muslims and the ultimate sacrifice many Muslims make when they decide to follow Jesus is confronting and meaningful.  Cultural misunderstandings and ignorant prejudices on both sides make for compelling reading and are cause to re-evaluate our own thoughts and actions.  With the underlying powerful messages The Next Target also offers terrific suspense and an authentic romantic element.  I was both moved and encouraged by Nikki’s story and I recommend you add this one to your wish list immediately.


I blame Nikki Arana, author of the Next Target for my lack of sleep during the latter part of July. Each night, her heroine Austia, a widow passionate about seeing Muslims experience the love of Christ, beckoned and held me page after page and chapter after chapter. Her life and heart were at stake. Should she go to the police, not only would she risk her ministry, but she’d endanger the lives of every Muslim woman who entered her ministry doors.

The story opens with a chilling honor killing—a young Muslim woman named Sabirah murdered at the hands of her cherished uncle. Before she dies, she’s given a chance to renounce her faith and live. But she will not. Cannot. Instead, she cries out to the only one who can save her—her beloved Jesus. Moments before the gun fires, the woman is whisked away and into the presence of her Heavenly Father.

We soon learn, Austia is one who told Sabirah about Jesus. Suspecting her and her ministry, radical Muslims begin to zero in, creating a dangerous web of deceit … a web Austia blindly stumbles into.

Throughout the novel, Nikki Arana handles a difficult subject with authenticity and grace. It is clear she did a great deal of research while writing this novel. It is also clear her love for the Muslim people mirrors that of her main character. With never a predictable moment, authentic and dynamic characters, and a sprinkling of heart-stirring romance, Nikki Arana’s the Next Target is by far the best suspense novel I’ve read in some time.

Reviewed by: Jennifer Slattery
Posted by Scrambled Dregs at 7:36 AM

No further said than done. On my wish-list. Sounds great!