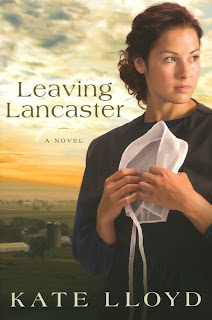 Holly Fisher feels betrayed when she discovers a long-kept secret---her mother was raised in an Amish community. Now her grandmother is begging them to leave Seattle and return to Pennsylvania. Holly is furious that she was never told about her relatives. Will mother and daughter find healing among the Plain People of Lancaster County?

Leaving Lancaster is about a woman named Esther Fisher, and her daughter, Holly.  Esther left the Amish community as a teenager with her intended.  They moved to California and married, but Samuel was then drafted and ended up giving his life for his country in Vietnam.  Esther has been plagued with guilt ever since, as she is the one that convinced him to leave.  Thus, Holly has grown up without a father or a family.  Finally, Esther shares a letter from her Amish mother, whom Holly believe was dead.  Esther’s mother isn’t doing well and begs her to come home.  This revelation stuns Holly, who becomes very angry and bitter towards her mother, while Esther deems herself unworthy of being forgiven.  They travel back to Pennsylvania to be reunited with their family, and both realize they have stronger ties there than they could have imagined.

I enjoyed this story.  There was a lot of focus on forgiveness, which I enjoyed.  Many of the characters in the book had reason, by our standards, to be upset with other people, as well as hold grudges, but as circumstances developed, they also learned the value of forgiveness.  It also shows how much city folks can come to appreciate the simplicity of simple living.

Reviewed by: Sarah Porter
Posted by Scrambled Dregs at 10:07 AM