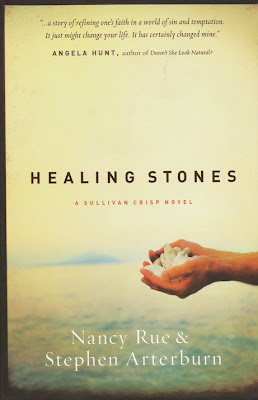 With One Flash Of A Camera, Demi’s Private Life Becomes Public News, She Doesn’t Know It Yet, But Her Healing Has Just Begun

Christian college professor Demitria Costanas had vowed to end her affair with a colleague. But she gives into temptation one last time…..and a lurking photographer captures her weakness for all to see. Quite literally, she’s the woman caught in adultery. And almost everyone –herself included-has a stone to throw.

Enter Sullivan Crisp, a decidedly unorthodox psychologist with his own baggage. He’s well known for his quirky sense of humor and incorporation of “game show” theology “ into his counseling sessions. And yet there’s something more he offers……hope for a fresh start.

Reluctantly the two of them begin an uplifting, uneven journey filled with healing and grace. By turns funny and touching, this story explores the ways humans hurt each other and deceive themselves. And it shows the endlessly creative means God uses to turn stones of accusation and shame into works of beauty that lead us onto the path of healing.


An auspicious debut for a candid yet tender series about pain, healing, and God’s invitation for second chances.


This story is a captivating read and free - therapy session in one well-written package. Referring to one’s emotional and spiritual growth the fictional psychologists says, “Until we’re dead, none of us is done,” and that is just one of the many great quotes in the book. Healing Stones begins with the main character dealing with guilt feelings of a sin she has been hiding. After being caught in the act the story then progresses to reveal how her sin affects everyone around her.


Hypocrisy, forgiveness, and God’s love are themes that run throughout the story. As a child that was a victim of a family members affair, I found the book on target in showing the ripple effect of that kind of mistake. The storyline also includes a firefighter and how he deals with a loss caused by the twin tower attacks. The dynamic duo Nancy Rue and Stephen Arterburn have succeeded in writing a book with both entertaining and spiritual value.

Reviewed by: Shellie Powell
Posted by Scrambled Dregs at 6:29 PM