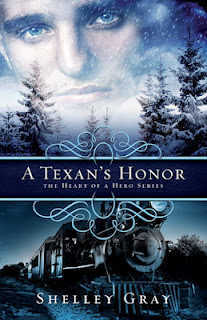 
Texas, 1874. Years ago, Will McMillan had fought in the open, next to his Captain, Clayton Proffitt. Now he's waging another war undercover, pretending to be a member of the notorious Walton Gang.

But when a hostage situation goes awry and an innocent woman is in the middle of the fray, Will knows he must protect her no matter what happens. Even if his cover is blown. Even if they risk being killed by his gang or by the lawmen on their trail. Even if the woman he's risking everything for will never love him back.

Well known for her Amish novels, Shelley Gray continues to impress me with her engaging Western romances novels, the most recent, A Texan's Honor, the second in her Heart of a Hero series. Beautifully told, with another appealing yet imperfect hero and a heroine who grows in strength and determination, A Texan's Honor is a terrific read for those who love their romance with some solid action and a little edge. Shelley's character development is excellent as she balances Will's dangerous and risk taking nature with his protective instincts and respect for Jamie. Their relationship slowly unfolds, as they battle attraction, duty and deeply held fears. Great pacing, solid dialogue and the appearance of the enigmatic and brutal Scout Proffitt, the estranged brother of Clayton Proffitt, add up to a compelling and intriguing read. Readers are in for a treat when they pick up this series and and I'm  really looking forward to Scout's story in Shelley's October release, A Texan's Promise!

Reviewed by: Rel Mollet
Posted by Scrambled Dregs at 8:03 PM

Thank you for reviewing A Texan's Honor. I have to say it was one of my favorite books to write. I'm so glad you enjoyed it, too.

i also enjoyd it keep on writing